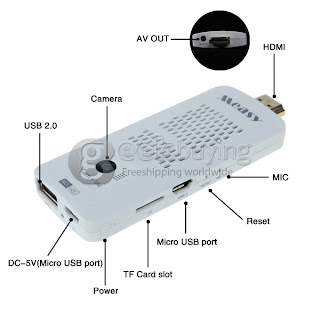 My current setup is the above Measy U2C powered (to the DC-5V Micro USB) by an HTC phone's USB power adapter (rated 5V 1A) connected to the DC-5V Micro USB port, through a breakout USB cable that allows me to place a multimeter in series (for current measurement) or in parallel (voltage).

Not the best in the world, eh.

Worrying fact:
Android power-off: turning off the stick with the SW power button in the Android status bar (Bob Finless 1.4 ROM) does turn the stick off (must re-plug power to turn on), HOWEVER consumption is 0.47Amps (>2 Watts!!!!). Hence, that feature is heavily broken, likely leaving the CPU at 100% usage.
Using the power-off button on the Measy's side, consumption comes down to 0.24A (CPU on but idle, and screen off), unacceptable, but better.

Linux Picuntu power-off: (apply "XFCE Shutdown button just restarts the stick") the stick also apparently turns off, upon clicking on shutdown, and Linux kernel is brought down, HOWEVER consumption stays then at 0.28 Amps  (1.3W), likely leaving the CPU idle but on.
So the Linux situation is less bad than Android's, but it's clear the Rockchip kernel code is bugged since the RK3066 is not really turned off (TODO: skim through the PM chip's code).